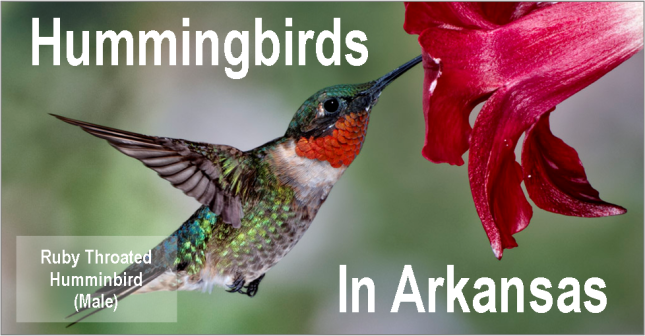 Here are some of the most frequently asked questions about hummingbirds and their answers.

Q: “When are hummingbirds here in Arkansas?”

A: Hummingbirds begin migrating to and through Arkansas usually in late March and early April. We tend to have just a few birds early, then the numbers pick up as the bulk of the migration moves through during latter April and into May The numbers then drop down as the northern migrants leave the area while the residents set up home here. The lower numbers continue through well into the summer, as the resident hummers fledge their young and northern migrants begin coming back into the area on their way south. The numbers begin to pick up again, usually in July. Unfortunately, a recent newspaper article left many readers with the impression that the hummers leave this area around the beginning of July…that was not what the author intended, and it is certainly not the case! Typically, the best part of our hummingbird season is August and September, and this can continue well into October before the hummers leave for the winter. In fact, in 2012, many hummers were still here in early November - while the Goldfinches were arriving!

Q: “So when should I take down my feeders down? If I leave my feeders up, won’t the birds stay into the winter?”
A: No. A hummingbird’s natural instinct to migrate is stronger than its urge to feed - which it can do ‘on the fly’ anyway, feeding on insects and stopping for nectar, so keep your feeders up and the nectar fresh until you don’t see any hummers for a week or two. In doing so, you may help a straggler or two along the way, but rest assured you will not tempt a hummer to stick around and miss its flight.

Q: “If the latter part of the season is the best, why am I still seeing only a couple hummingbirds?”

A: Just in this past week, I have had five customers tell me that they have more hummers than they have ever had before! But, to answer that question, you need to understand that, in general, a single feeder will only support a limited number of hummers, typically 3-5, due to dominant birds chasing off other birds. A rule of thumb is that the more feeders you put out, the more hummers you are likely to see. A single pretty glass feeder *may* be all you need during April, May, June and July, but come August and September, try adding a couple more less expensive feeders and see if your numbers increase. Alternately, even during the ‘slower’ months, consider putting out several smaller feeders (or don’t fill your feeders all the way), rather than one large one, and see what happens…you might be surprised! As the bulk of the migrants come through in September, there may be so many birds around that you may see several birds on a single feeder at once because there are just too many around for them to chase each other away. Incidentally, I said “may” above because we have several customers who go through 3-5 gallons of nectar every day during the hummer season. We don’t know why these folks get so many birds, but they sure enjoy them!

Q: “I hear that hummingbirds and other birds send out “scouts” ahead of the group to look for nesting sights. Is this true?”

A: No. The early hummingbirds that come through are just that…earlier than the rest. The concept that a “scout” would fly ahead, check things out, and then go back and ‘report’ on the conditions ahead isn’t supported scientifically. Consider that many of the hummingbirds are migrating across the Gulf of Mexico. This would mean the “scout” would have to fly all the way across the Gulf without getting lost, check things out, fly back out across the Gulf to meet the group who presumably aren’t lost (hummers don’t flock, per say, so that kills that concept right there), and still have the energy to turn around and fly back to shore with the group, in essence, completing the trip twice! While there is no question that hummers communicate with one another (they do make little chirping sounds), a scout trying to communicate with a non-cohesive group would be virtually impossible. Additionally, consider that banding studies have shown that hummers, and some other migrants typically accredited with having “scouts” - like Purple Martins, tend to return to the same places each year. So why would they need scouts in the first place when their migrations instincts tell them where to go?

Q: “So the hummingbirds fly across the Gulf of Mexico? I’ve heard they fly on the backs of geese that are migrating. Surely those little tiny birds can’t fly hundreds of miles without stopping!”

A: Another persistent myth… This one really should go into the records as being an old wives tale. It would be interesting to know how this one got started, but, no, hummers do not ride on the backs of geese – or any other birds (there are variations to this tall tale) – to migrate. Yes, they do indeed fly all the way across the Gulf without stopping, a journey that takes about a day and a half to complete. Sadly, some birds simply don’t make it because they are not strong enough. Those that do make it are exhausted when they reach the Gulf coast along Texas, Louisiana and Mississippi. Not all hummers follow this same route. Some migrate through the Caribbean and along the Florida coast while others come up the coast of Mexico and Texas. But many do make the long journey across the gulf, unaided by other migratory birds. Remember, they make this trip twice a year, so this is part of the explanation for hummingbirds being so protective of their food sources (what is often interpreted as being “mean”). The strongest birds make it across – survival of the fittest. Nectar from plants and feeders along with insects provide the hummers with the nutrition for the strength and energy they need to make the trip. This is another good reason not to take down feeders too early – give every bird a fighting chance!

Q: “So, if the hummingbirds need energy, then fixing a ‘stronger’ concentration of nectar will help the birds, right?”

A: No. Nearly all ornithologists and hummingbird experts agree that a simple solution of four parts water to one part sugar is the best mixture, regardless of the time of year. Why? Because that mixture most accurately mimics the average sugar/carbohydrate content of natural nectars found in most flowers. If the birds need ‘more,’ they will simply drink more nectar.

Q: “So what about the hummingbirds that stay over during the winter?”

A: Hummers that wind up here during the winter help perpetuate the myth that keeping your feeders up will entice the birds to stay instead of moving towards warmer climates, but, in all cases I am aware of, the birds that are found here during the winter are birds that somehow lost their way while migrating from western habitats. If a Ruby-throated hummer should wind up here over the winter, I would suspect that this is still a wayward migrating bird and not a resident hummer. In any case, the biggest challenge is not how much sugar to use in the nectar (stick with the 4:1 for the same reasons noted above), but how to keep the nectar from freezing. Assuming you have a covered outdoor area, you can use an inexpensive, outdoor rated clamp light with a reflector around it to keep the nectar from freezing. Use about a 40 watt bulb and clamp the light to something below the feeder so the reflector and bulb are situated underneath the feeder. The heat generated by the bulb will be concentrated by the reflector towards the feeder and will help keep the nectar from freezing. Check this often, particularly at first, to make sure the bulb isn’t heating the nectar too much or melting the feeder if it’s plastic.

Q: “Should I call someone if I do have a hummingbird that stays at my house during the winter? If I do, will my yard be run over by “birders?””

A: That, of course, is up to you, but researchers would like to know where migration patterns are changing. If you call us, we will put you in touch with an expert who will probably visit your home, catch and band the bird, and identify its species and other data in a single visit. They may want to come back or check with you throughout the season to find out how long the bird continues to come to your feeder. Whether you want to make your finding publically known is up to you. Yes, if you do make the knowledge public, you will probably have more company than you expected, at least for a few days after the sighting is reported. Please be assured that the experts we work with will keep your sighting as confidential or public as you would like them to.

We hope this clears up some ambiguity and dispels some common myths about hummingbirds. If you have other questions, please feel free to call us and we will try to answer your questions or put you in touch with someone who will be able to.